Congrats to StripJoints clients AC/DC for their #1 Billboard Debut

by Bobcrete
Comments are off

AC/DC’s “Rock or Bust” debuts the band’s third No. 1 on Billboard’s Top Rock Albums chart. 172,000 sold, according to Nielsen Music. Their 15th studio album also debuts at No. 1 on Hard Rock Albums and hits No. 3 on the Billboard 200.

Concrete Marketing and StripJoints Music were proud to assist with the launch / marketing efforts with an exclusive promotion to gentlemen club DJs. StripJoints Music DJs got a two week exclusive of the “Sweet Candy” prior to it being available anywhere else. This generated a # 1 debut on our DJ Pool Charts and tremendous amount of social media exposer among the 800 strip club DJs that StripJoints services. 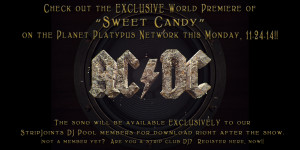